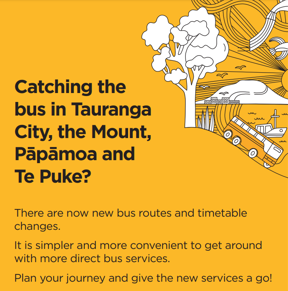 Passengers in Tauranga City, Mount Maunganui, Pāpāmoa and Te Puke now have new and improved bus routes and timetables, to make it simpler and more convenient to get around on Bayhopper buses.

The changes include all day direct services between Pāpāmoa and Tauranga City and routes that are much easier for passengers to understand.

Feedback and submissions from the community have helped us with this refresh and we thank everyone for their input and interest. While not all suggestions were able to be incorporated into these changes, we value them and they will be considered in future network reviews.  We look forward to making public transport a more attractive option.

Bus route 2 Pāpāmoa Beach – Pāpāmoa Plaza – Bayfair – Tauranga City  replaces routes 30, 30x, 33, CL and HL (between Bayfair and Tauranga City). This frequent service runs every 15 minutes on weekdays and every 30 minutes on weekends and public holidays. A key benefit is direct travel between Pāpāmoa and Tauranga City, (via Bayfair) without the need to transfer. To serve more members of the community, the bus route will have two different routes at the Pāpāmoa end of the journey; 2B travels via Livingstone Drive and The Boulevard and 2W via Wairakei Avenue and Emerald Shores Drive.  All buses travelling east from Bayfair will use Stand B on Farm Street.

Bus route 20 Te Puke - Bayfair replaces route 221 which only operated on weekdays, it also replaces the Te Puke extension of the Gold Line route. It now operates an hourly service, 7 days a week, with all trips traveling along Tara Road and connecting with route 2B. A modified morning and afternoon trip goes via Pāpāmoa College for students at school times.

Bus route 22 Pāpāmoa Beach – Maungatapu – Tauranga City replaces routes 36 and 41. On weekdays trips depart from Papamoa until 9am so Papamoa residents can travel to workplaces and schools on Cameron Road including the hospital. Between 9am and 3pm the service operates between Maungatapu and Tauranga City only. From 3:10pm this service travels the full route from Tauranga City to Papamoa again.

Services that no longer operate

The bus services below will no longer be running. Please use the links above to plan your journey and view the new routes and timetables.

The bus services below have some timetable and route tweaks. Please use the following links to see how these changes effect you.