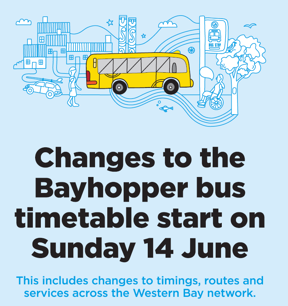 Weekend services for Te Puke, new bus routes and a change in bus-stops to help the visually impaired are just some of the changes to the new Tauranga bus timetable.

The changes made by Bay of Plenty Regional Council have come about following community feedback received in 2019 after consultation.

Feedback from the visually impaired community will also see a change at the current Farm Street bus stop with Stand A splitting into A1 and A2.

“Because of the length of the bus stop it was difficult to see the numbers on the buses as they approached.  By splitting Stand A into two, people will now know where to wait for their bus.”

Stand A1 will be for the Cross Town, Hospital Link and City Link services.

o   51 is seven days a week between 9am & 3pm, linking Pyes Pā with The Lakes and Tauranga Crossing

o   57 is a weekend only service between 10am and 3pm, linking Greerton and Pyes Pā with the Pyes Pā Memorial Gardens

A number of routes will now utilise the bus stop on Durham Street close to the Waikato University campus.